Setting up the Pi to run Python scripts

All right, your Pi is up and running, now you just need to configure it to run Python scripts.
The good news is: there’s not much to do if you are using Raspbian, as it has Python installed out of the box 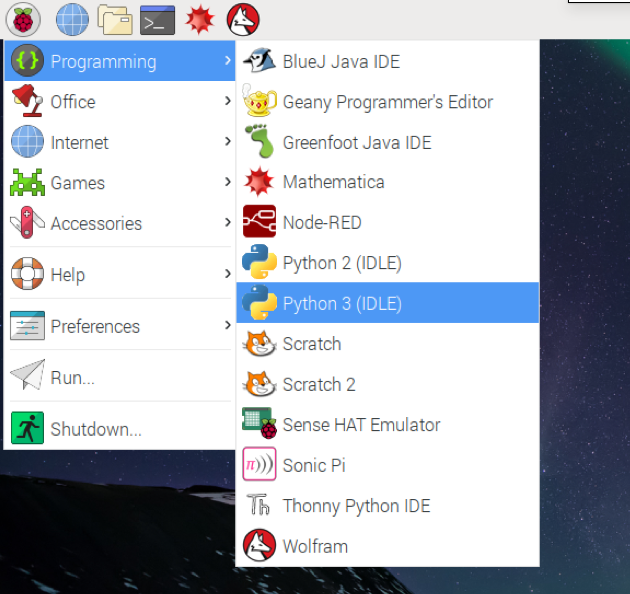 One thing you can do is download the latest version, probably because Raspbian does not have the latest release. Head over to python.org, and upgrade if necessary.But other than this you are good to go. You can copy your existing .py files and start using them with the built in IDE or Terminal straight away. Speaking of which: if you are copying over files you used on Windows or OS X, remember that on Linux you’ll need a different shebang line. You probably know where to look this up, but here it is for reference:

Also, if you want to start scripts from the terminal there are a few extra steps to do:

Automating scripts on the Pi with CRON

Now to the interesting part. So far we set up our Pi and started to run python scripts on it. But logging in through RealVNC or SSH every time we want a script to run is not really convenient (with the exception if we want to trigger scripts via SSH coming from another device or service automatically, but this will be detailed in another post).
If we have a web-scraping script that looks for some info on the web every day and returns some information (like the food notifier explained in my previous post), then what we want is total automation. The script should start all by it self, do it’s job, and return the information.
Luckily we can do that with a built in tool in Linux called CRON.

How to setup CRON

The format for the parameters is the following:
Minutes Hours Day of month Month Weekday Command
If you want to skip a parameter, just add * as input.

From the Raspberry Pi Official API:

Cron is a tool for configuring scheduled tasks on Unix systems. It is used to schedule commands or scripts to run periodically and at fixed intervals. Tasks range from backing up the user’s home folders every day at midnight, to logging CPU information every hour.

The command crontab (cron table) is used to edit the list of scheduled tasks in operation, and is done on a per-user basis; each user (including root) has their own crontab.

A graphical application for Cron is available by installing the gnome-schedulepackage:

You can then launch the program Scheduled Tasks from the main menu.

Run crontab with the -e flag to edit the cron table:

The first time you run crontab you’ll be prompted to select an editor; if you are not sure which one to use, choose nano by pressing Enter.

The layout for a cron entry is made up of six components: minute, hour, day of month, month of year, day of week, and the command to be executed.

This cron entry would run the backup.sh script every day at midnight.

Run a task on reboot

To run a command every time the Raspberry Pi starts up, write @reboot instead of the time and date. For example:

This will run your Python script every time the Raspberry Pi reboots. If you want your command to be run in the background while the Raspberry Pi continues starting up, add a space and & at the end of the line, like this: